Targeting the bone marrow microenvironment as an adjunct to existing therapies

Haematological cancers have a high frequency amongst the general population and pose a major health care problem. Significant progress has been made in the treatment of leukaemia. The treatment of chronic myelogenous leukaemia (CML) was revolutionized by targeted therapy in the form of imatinib mesylate. However, targeted therapy is not curative and at least 61% of patients relapse when imatinib is discontinued. Rare quiescent leukaemia-initiating cells (LIC) or leukaemic stem cells (LSC) in CML and acute myeloid leukaemia (AML) appear to be resistant to tyrosine kinase inhibitors (TKIs) and other chemotherapeutic regimen, possibly due to LSC-protective effects by the BMM, leading to disease progression and relapse. Overall, the 5-year survival rate of adults with leukaemia is only 44%, and for adults with AML only 25% will live for 5 years. This warrants the search for novel, adjunct therapies.

The BMM and haematopoiesis

Haematopoietic stem cells (HSC), the normal counterparts to LSC, are situated in an HSC niche in the BM which consists of osteolineage cells, sinusoidal endothelial cells, mesenchymal stem cells, adipocytes and sympathetic neurons. Osteoblastic cells support haematopoiesis, have been shown to influence the HSC pool size and to regulate HSC quiescence. Mesenchymal stem cells in the bone marrow microenvironment (BMM) are necessary for HSC maintenance. First evidence of vascular regulation of haematopoiesis was provided by the demonstration of haematopoietic regeneration occurring at sites of BM sinusoidal vascular regeneration. Several in-vitro models and in-vivo models are supportive of the notion that sinusoidal endothelial cells regulate haematopoiesis, in part by soluble factors and by anatomic proximity of CD150+ CD244- CD48- lineage- (SLAM marker+) HSC to BM sinusoidal vessels. 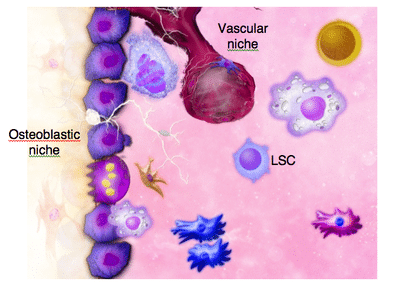 The bone marrow microenvironment in leukaemia

The decreased adhesive properties of CML cells to BM stroma have been recognised.  CD44, a type I transmembrane protein binding to hyaluronan and osteopontin, and selectins and their ligands (Krause DS et al., 2014, Blood) are mediators between LSC and their BMM in AML and CML (Krause DS et al., 2006, Nat. Med.). Modulation of the BMM by parathyroid hormone (PTH), the most potent regulator of bone turnover, leads to reduction of LSC in CML via increased BM microenvironmental transforming growth factor (TGF) ?1, but not AML, suggesting differential effects of the niche on a leukaemia (Krause DS et al., 2013, Nat. Med.). Additionally, the BMM has been shown to influence the phenotype of a leukaemia.

Traditionally, treatment of the leukaemias has targeted the leukaemia cells themselves, but, as we have shown, pharmacological modification of the BMM can lead to eradication of leukaemic stem cells. Therefore, our laboratory focuses on inhibiting different pathways of communication between leukaemia cells and the bone marrow niche by the use of various leukaemia models and pharmacological agents. Our goal is to test drugs targeting identified pathways in murine models and to, eventually, initiate clinical trials which will, hopefully, lead to prolongation of survival in patients in the future.